Our Society is a non-profit organization established with the chief aim to conserve the Great Buddha/Daibutsu (a Japanese term for a Buddha statue ‘great’ in size) at Shūrakuen municipal park, formally a traditional Japanese ryōri-ryokan (‘culinary inn’) complex, in Tōkai City, Aichi, Japan. The Daibutsu was consecrated in 1927; made from reinforced concrete with a height of 18.79m (without the plinth), it is commonly known as Shūrakuen Daibutsu. As the condition of the statue has deteriorated since its consecration, our Society, which is run by the descendants of the founder and other caretakers of the Daibutsu, has launched an initiative in its conservation efforts to pass it on to the next generations.

As part of the wider conservation of Shūrakuen Daibutsu, our secondary purposes are to protect its related historical and cultural heritage and to advance the research into it from the perspective of modern local history, in collaboration with individual supporters, the local and regional authorities, Buddhist organizations, academic institutions and private companies. Through these activities, we wish to contribute to the local community in a reciprocal manner and promote tourism centred around the Daibutsu. 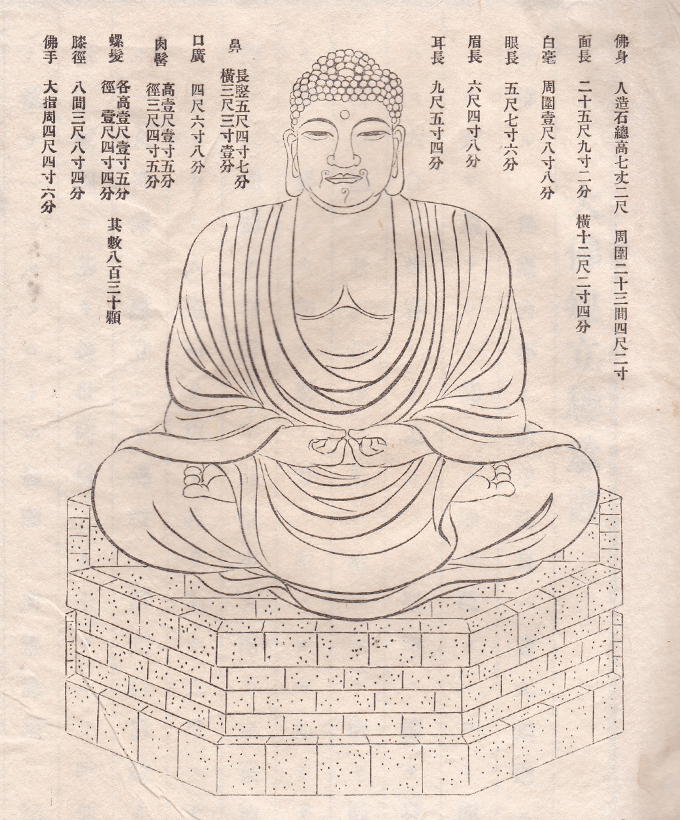 Shūrakuen Daibutsu depicts Amitābha, the principal buddha in Pure Land Buddhism. It was built prior to its consecration in 1927 on the premises of Shūrakuen, located in Ueno-mura, Chita-gun, Aichi (present-day Ueno-cho, Tōkai City), by its benefactor Saikichi Yamada, a businessman who was running the ryōri-ryokan Shūrakuen. The construction emerged both as a result of his long-held devotion to Buddhist patronage and as a means to commemorate the marriage of Emperor Shōwa. Ever since its consecration about a century ago, the Daibutsu has been continuously adored by the local people. At present, the Daibutsu and its landscape are both registered as Tokai City’s cultural properties. 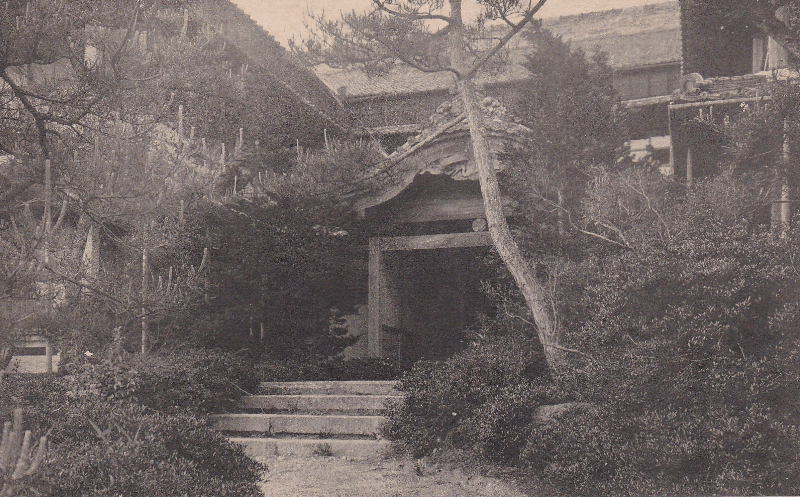 The construction of Shūrakuen Daibutsu was first planned in 1916 to retrospectively commemorate the Great Coronation of Emperor Taishō (1912). However, due to insufficient donations from the general public, the work was delayed. As Saikichi eventually decided to self-fund the project, it was finally commenced in 1923, no longer to commemorate the Great Coronation of Emperor Taishō, but now rather to celebrate the royal wedding of Emperor Shōwa in 1924. The construction took over three years, and the amount spent on it was 150,000 yen (240 million yen at today’s rate). 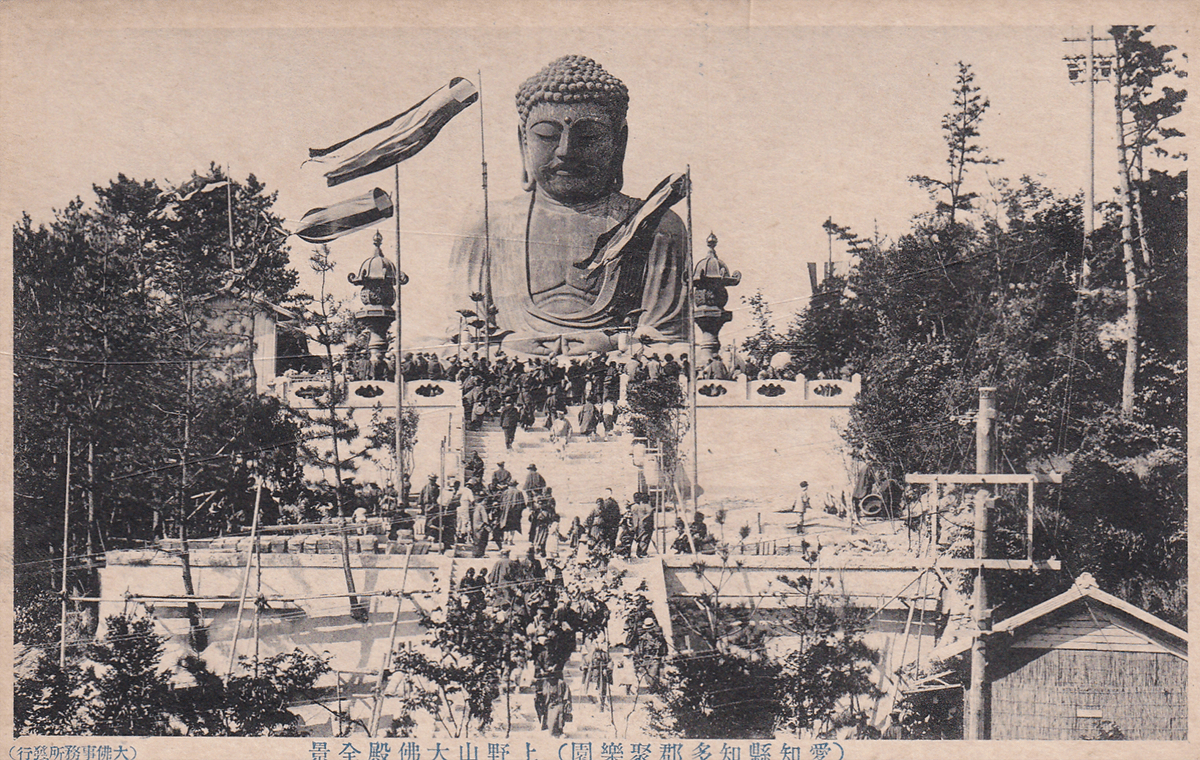 The sculpture was constructed using reinforced concrete, which represented the latest technology at that time, and it was then the tallest daibutsu in the whole of Japan. Saikichi adopted this method because he had previously lost some of his monuments to fires and floods, and had a wish to make an indestructible statue that would be immune to such disasters in future. It is now considered a rare early example of sculptural construction in reinforced concrete in Japan, and constitutes a valuable piece of cultural heritage.

Originally enshrined in the centre of Shūrakuen Daibutsu was the statue of Shōkannon; according to tradition, this statue was a personal, portable Buddhist image belonging to Empress Go-Sakuramachi, which Saikichi had received from Mukai Kōno, the chief abbot of Nanzen-ji Temple in Kyoto, who led the consecration of the Daibutsu. The image is said to have been removed and taken by the Supreme Commander for the Allied Powers (SCAP), commonly referred to as GHQ (General Headquarters), in occupied Japan. Previously, fourteen scrolls of the founders of the 13 mainstream Japanese Buddhist sects in addition with Bodhidharma, the founder of Zen Buddhism of South Indian origin, were hung on the interior of the Daibutsu, with the Shōkannon image at the centre; along with the Shōkannon statue, these scrolls are also no longer extant. Similarly the ūrṇā (a circle of hair between a Buddha’s eyebrows, found in traditional Buddhist iconography) on the forehead of the Daibutsu, whose function was initially to emit light from a built-in electric illuminator, was also removed, though for a different reason: according to the accounts of Saikichi’s second and third daughters, the reason behind the removal was that the Daibutsu had appeared to Saikichi in a dream complaining that “my head hurts (or “feels hot”)”.

Apart from Shūrakuen Daibutsu itself, a pair of Kongōrikishi (lit. ‘diamond-wrestler’) statues, the remaining one of an original pair of tōrōs (‘stone lantern’), a jyōkōro (‘cauldron incense holder’) and a sandō (‘passage of worship’, the path leading to the Daibutsu) have been kept intact in the landscape. Also located in situ in the premises is the memorial stone dedicated to the late Saikichi Yamada, though his metal statue, which was made together with the stone, no longer exists. Despite the survival of the Daibutsu through World War II, owing to the nature of the material, the metal image of Saikichi was confiscated during the war to be melted down and turned into weapons, according to the Metal Recovery Act of 1944 enforced by the Imperial Japanese Army. 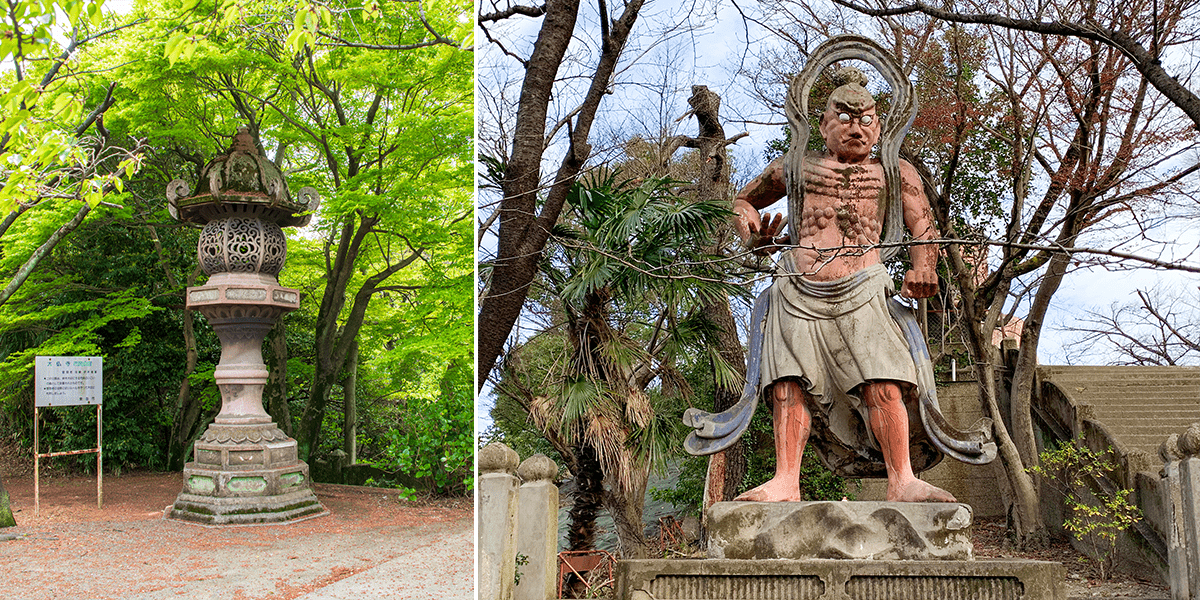 The biography of the founder

Born in Fumoto village in Atsumi-gun, Minonokuni (present-day Daibutsu-cho, Gifu City, Gifu) in 1852, Saikichi Yamada went up to Tokyo to be trained as a chef, and then set up a restaurant in Nagoya in his early days. After that, in around 1881, he invented Moriguchi-zuke (a type of kasuzuke), a white radish of the Moriguchi strain preserved in sake/mirin lees (sediment formed through the fermentation process), which has since become one of Nagoya’s local delicacies. He also entered into the manufacture and sales of canned food for the first time in Aichi Prefecture in 1884, and then established Japan Kanzume Co., Ltd. in 1902. Meanwhile, he also pursued his political career as a member of both the Nagoya City Council in 1895 and the Aichi Prefectural Assembly in 1899. As such, he became a wealthy and prominent member of the local community.

Other major enterprises and contributions by Saikichi Yamada include the construction of such ryōri-ryokans as Toyōkan (in present-day Naka-ward, Nagoya, Aichi) in 1895, Nanyōkan (Minato-ward, Nagoya) from 1910 onwards, Shūrakuen (Tokai City, Aichi) in 1916 and Hokuyōkan (Kani City, Gifu) in 1926, as well as Nagoya Educational Aquarium (Minato-ward, Nagoya) from 1910 onwards; the foundation of Chūkyō-Shinpō (a newspaper publisher later known as Nagoya-Shinbun and currently as Chūnichi-Shinbun) in 1887; the involvement with Nagoya Gas (currently known as Tōhō Gas) between 1906 and 1913; the establishment of Atsuta Electric Tramway in 1910; the co-creation of Chita Train-Railway (currently known as Nagoya Railway) in 1910; and the co-foundation of the Yanagibashi Central Wholesale Market in Nagoya in 1910. 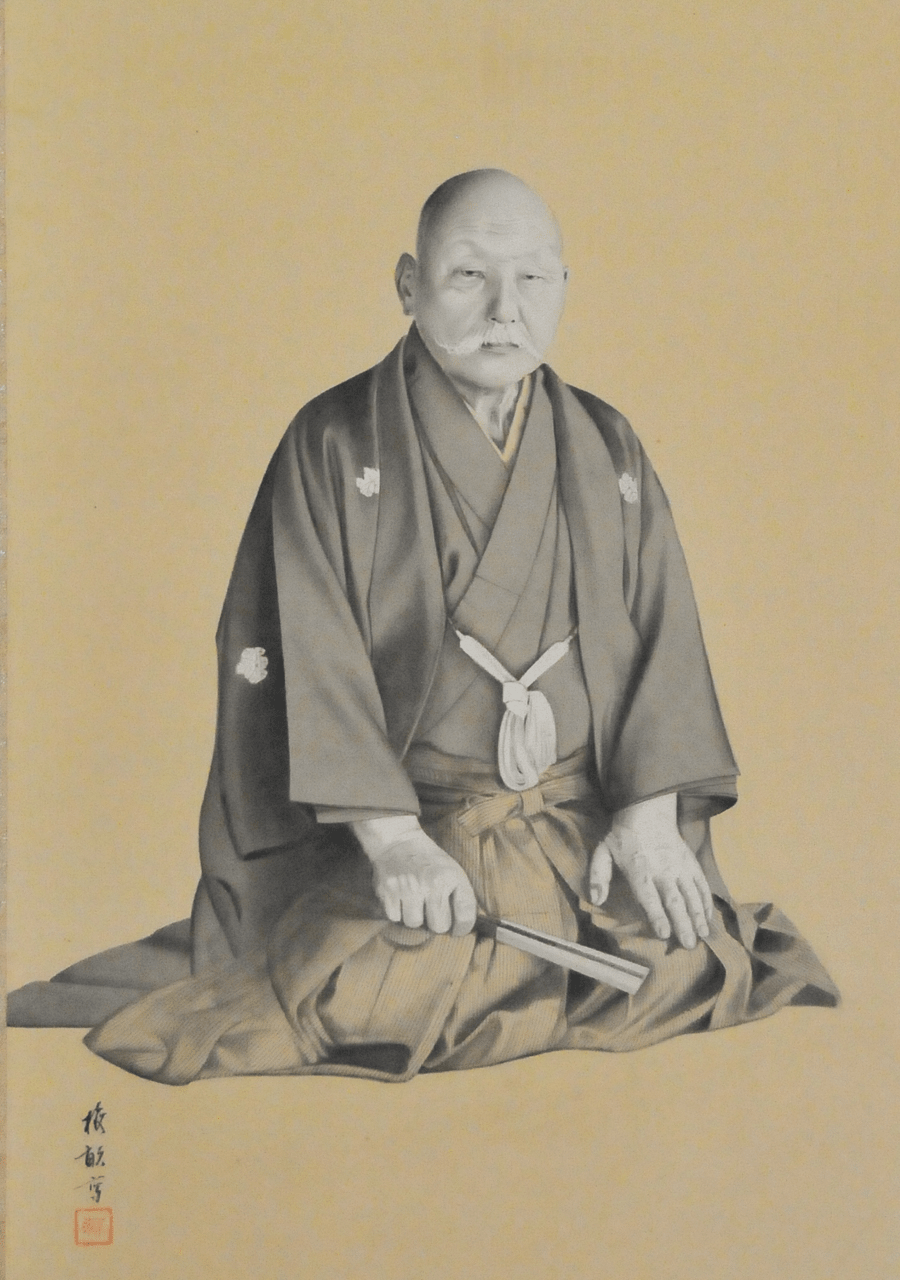 Pre-war works on the theme of Shūrakuen Daibutsu

Shūrakuen Daibutsu appears in this mystery novel written by Tankisha (est. 1927), an association of five novelists, which, most prominently, includes Ranpō Edogawa. It was then made into a film of the same title, which was released in 1929.

This is one of Japan’s earliest tokusatsu (‘special effects’) films, in which the Shūrakuen Daibutsu stands up and roams around some iconic places in and around Nagoya in response to the homage paid by various worshippers. The director, Yoshirō Edamasa, was the mentor of Eiji Tsuburaya, well-known for co-creating Godzilla (1954) and supervising the Ultra series (1966 onwards); Yoshirō Edamasa is considered to have been responsible for drawing Eiji Tsuburaya into the world of tokusatsu. The representation of Shūrakuen Daibutsu in film can be considered one of the milestones in the history of Japanese tokusatsu films. 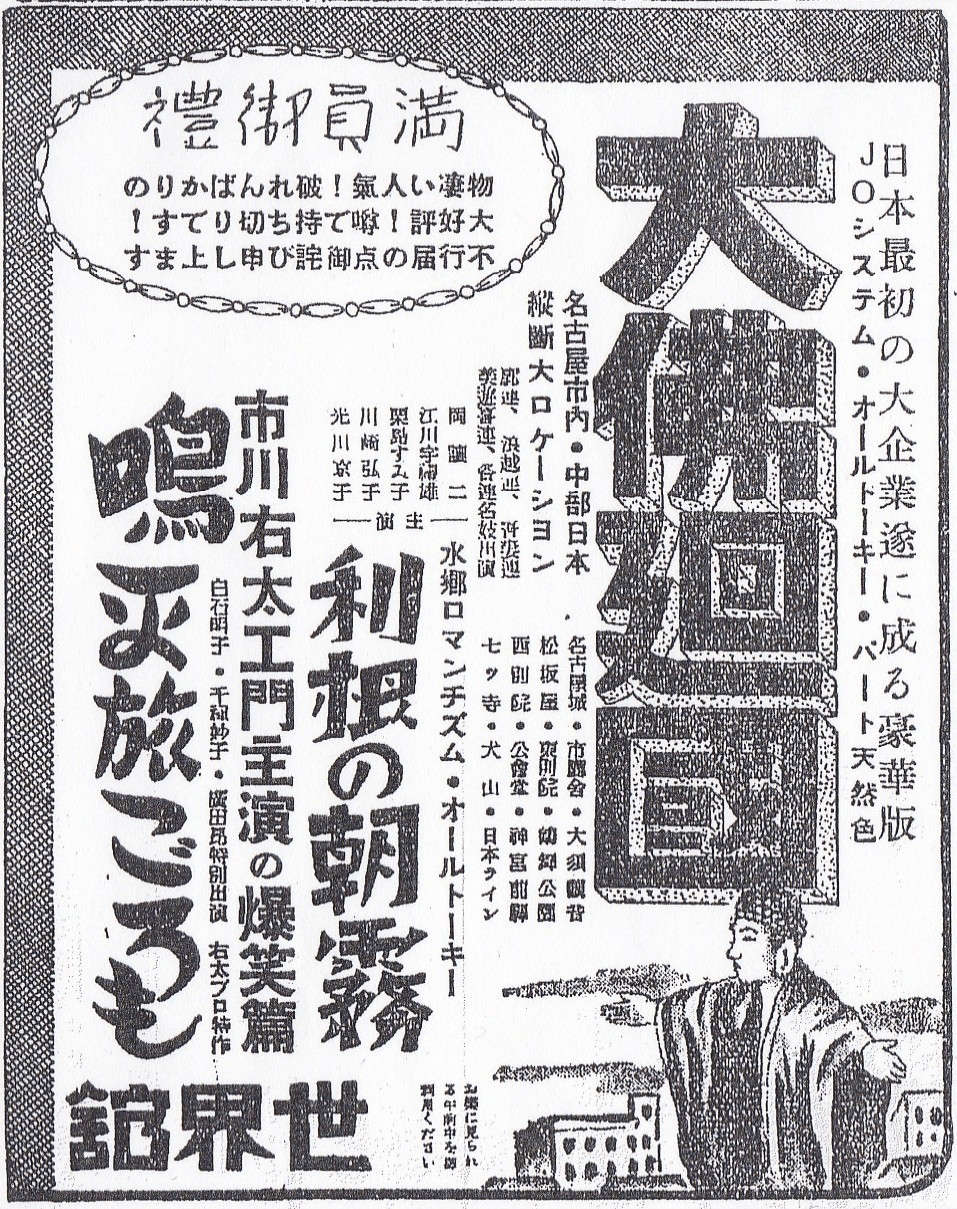 Currently, we are searching for the original copies of these lost films of Nanpō no Hihō and Daibutsu-kaikoku: Chūkyō-hen, along with the aforementioned statue of Shōkannon, and seeking any information about them, however little. If you have any information regarding their whereabouts, please let us know via the contact details below.